I'm having a bit of a love affair with the Gulf Coast right now.  As I sit down and prepare to write my first post for Deep South Moms Blog, a new sister site of Silicon Valley Moms Blog network, I am struggling with words to describe how I feel about living in the Deep South.

I decided to write for Deep South Moms Blog because it would offer a thematic challenge and motivator for me.  I write very loosely about living on the Gulf Coast on Velveteen Mind, but when I give any real thought to what it means to live in the South, I actually have a lot to say.  A lot to share.

Culture coming out of my humidity-drenched pores.

Writing for the SVMB network of blogs is going to be a thrill.  They are a fantastic group, founder Jill Asher is amazing, and it is going to give me an opportunity to push my writing.  I tend to get a little lazy about writing on a daily basis, so this new focus will hopefully bleed over into Velveteen Mind.

In the meantime, lest you think I'm going to be getting all serious on you as I explore the delicate art of Southern Charm, allow me to introduce you to one of my favorite blues men ever:  Mississippi Gary.

If you don't laugh at this, we can't be friends.  Yes, I have a lot of friendship requirements, I know, but this one is for real.  ...ish.

Be sure to skip ahead to minute 1:00 for the Mississippi Gary bit.  This is from The Kids in the Hall, Mississippi Gary played by Mark McKinney, so yes, I am offering you a bit of Southern culture by way of Canada.  Classic, eh?

It's only appropriate, as I am Southern by way of Illinois.  Or, as I much prefer to say:

Yankee by birth, Southern by the grace of God.  Praise the Lord!

My oldest son recently turned four.  For all practical purposes, he is a man now.  Or so he would have us believe.

Apparently, he is getting married soon.  I thought I had at least fourteen more years with him,

at the very least given that we do live in Mississippi, but we have had a good run.  It would be disingenuous of me to act surprised at the news of his impending marriage, though, as I clearly should have seen this coming.

(Up until this point on my blog, I've always referred to my oldest son as "Pants."  This is short for Mr. Pee Pants, which is something we've called him since he was a baby, a play on an Aqua Teen Hunger Force character called MC Pee Pants.  But men shouldn't be called by baby names such as "Pants," so before I tell you the story of how he came to become engaged, I think the time has come to change his "blog name."

Pants, my quintessential first born son, full of entertaining quirkiness, endearing with your quiet loveliness, I hereby christen you with your new blog pseudonym:  "Q."

Jot that down folks.  We don't do reminders around here, mostly because I forget to, a la Sweet Valley High intro chapters about the characteristics of Elizabeth vs. Jessica.  Pants is now Q.  Done.  Blog magic, no legal forms involved.  Now back to the story of how my baby became fodder for an MTV reality show.)

While doing housewife-ish things the other day, I overheard Q and 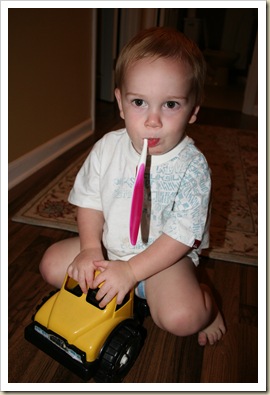 his younger brother, Goose, arguing in the kitchen over a toy.   Q ultimately cornered Goose against the cabinets and said, "Just listen to me.  You should give me [the toy] because I'm going to have to leave you some day."

Goose responded in his best Toy Nazi tone with "No toy for you!"  He's two, but he has a keen sense of pop-culture humor.

Q then calmly explained, "Look, some day I'm going to get a girlfriend and I'm going to have to leave you.  Now just give me the toy and we'll play."

How little time we all have together.  Thank God Q is here to remind us that someday soon he'll choose hooking up with his girlfriend over playing with his baby brother.

Good grief, people.  I about fell over the dishwasher when I heard his Imminent Girlfriend Warning.  He was so serious and I swear to you, Goose eventually bought the argument! 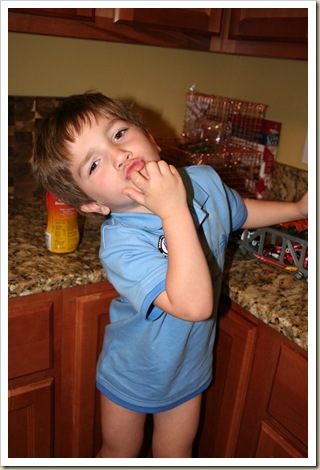 I had almost forgotten to remember that we had best all bend to Q's wishes because we are going to miss him when he's out macking on the ladies, when he offered another reminder the other day.

Q goes to a local Montessori school three days a week, so Goose and I were picking him up the other day and loading the circus that is our family into the car when Q broke the news...

Goose, don't say he didn't warn us.  Like three days ago.

Q:  She said yes.  We are going to get married outside.  I really love her.

Me:  Yeah, that Evelyn is something else.  She's really pretty, don't you think?

Had I known that running speed is how men choose their wives, I would have spent more time in training.  As it is, I don't think I even owned running shoes when I met my husband.  Ah, the "what if's" of life...

Me:  So, who is paying for this wedding?

Q:  Pa will, but you and Dad can come, and Goose.  And Cittie and Granddad.  And Ghee.  And Luke.

Goose:  I want to party.

(note:  This sounds like an entirely coherent contribution to the conversation, but Goose is two and once he caught on enough to realize there were invitations involved in whatever it was we were talking about, he was up for any party.) 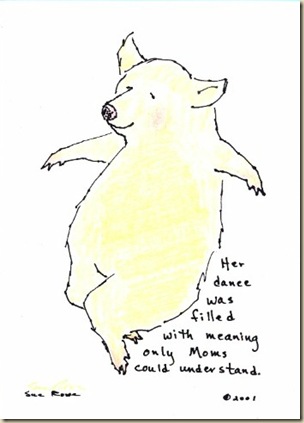 My little man, Q.  He has already caught on to the delicate nature of the relationship between son-in-law and mother-in-law.  I have to say, setting her up with a dancing pig right out of the gate is one way to set the expectations for a relationship.

Q:  No, actually I'll get a dancing monkey to dance with Goose.

Good grief.  I really am a mom.

Conversations like that make me think I should stop lacing my coffee with LSD.  How else do you explain these conversations with toddlers?

The funny thing is, if you are a parent, the progression of that conversation probably not only made sense, but sounded familiar.

Welcome to toddler parenthood.  Leave your disbelief at the door.  Dancing pigs are real and like going to weddings just as much as the rest of us.

And don't forget the dancing monkeys, too.

Promises promises: I promise you a pig.

And I absolutely love how I never got around to posting something new over here.  One of the things I stress to the editors is to try to give their bloggers enough time to spruce up their blog for any new readers coming their way once their post is published.  Ahem.

Would you buy it if I told you that the editor that chose my post for the Overcoming Adversity channel, Heather from The Spohrs are Multiplying, never told me my post was being featured?  Hm?

No, I didn't think you would buy that.

So...  I'm writing this as I'm getting my sons ready for preschool.  If you are a new reader (hey you! isn't Blog Nosh fun?!  all of the posts this week are amazing, but that one of mine is one of my favorites and one of the reasons I even started this blog, as I needed to get that off my chest), come back in a few hours and I'll have a brand spanking new post up.  In the meantime, check out my "Favorite Posts" in my sidebar...  just look for the baby feet.

And if you are a regular reader, don't tell the new guys that I am totally full of it and don't actually post here more than twice a week.  Because you are all a bunch of liars.

"And then I will hire a dancing pig to sit next to her mother."

Yep.  You are dying to find out what that's about, right?  New post.  As soon as I get back from dropping the boys off at preschool.  And, um, as soon as I write it.

But I'll write it in my head on the way to and from school.  And I type wicked fast.  I won the typing award in high school, you know?

Yes, I am that cool.  You have come to the right place.  Get yer nerd on, folks.