Who hit the publish button?

I'm An Old Woman Whacking Social Media with My Big Stick and I've Had Enough of Your Lip.

Writing speaker bios for a couple of upcoming conferences, I realized that I am losing a swath of patience for social media.  Once completed, my bios read as though written by an old woman carrying a very big stick, which she freely waves at young children and drags along picket fences. I’m getting fed up.

So many passionate bubbles of controversy, elevated by hot air.  Too few people harnessing their desires and taking action.

Too many outcries about what “they” should be doing and not enough about what “I am” doing or plan to do henceforth.

I’ve had enough.  Enough with the complaining already!  In my day, we got pissed, we got to work!  Enter my old woman:

Offended by poorly-researched, generic PR pitches?
File them and move along.

When bad PR pitches arrive to clutter my inbox, I slap a label on them and file them for follow-up.  That follow-up is generally granted time proportionate to the time the pitchman gave his research of me and my audience.  Most of the time, I don’t even read them past “Dear Velveteen Mind.”  Believe it or not, my given name is not Velveteen Mind.  I consider it an affront to my parents that you would suggest as much.

See what I did there?  Humor.  I don’t take myself too seriously.  Or you.

And I don’t waste time or emotional energy on poorly-researched pitches.

Overwhelmed by your twitter stream?  Too many voices?
Unfollow at will.

I unfollowed over 900 people on twitter last weekend.  I didn’t make a big fuss about it.  I didn’t labor over the consequences.  I just did it.   My feed had become too noisy, too cluttered, too difficult to see conversations amid all of the marketing.  So I fixed it.

On a daily basis, I use twitter lists to filter my feed into easily-digestible chunks, largely through TweetDeck, organized as follows:

Why not just unfollow everyone that isn’t on my Enrich and Inform list?  Because I like to give real people that want the ability to DM me that ability.  Also?  How the hell am I supposed to know if I want to follow someone or not if I don’t give them the chance?  I notice them enough in my main feed, I move them to my filtered feeds and start building a relationship.

Outraged that mom bloggers don’t get paid what we’re worth?
Get paid what you’re worth.  Or don’t sweat the money.
But choose one.

The well-done PR pitches I receive and am interested in, either as-is are only loosely, are forwarded to my agent.  Consider her a live-action media kit.

I tell her how I want to interpret the pitched campaign (which I usually introduce in my reply to the PR firm when I forward them to my agent) and she explains to the company what their marketing options are with my platforms.  Read:  “Megan doesn’t work for free but you’ll love her.  She’s worth it.  Here are some ideas and options.”

I’m trying to convince her to say “Do not look The Talent directly in the eye.” but she isn’t cooperating.

Think you’re not fancy enough to have an agent?  She works on commission.  Doesn’t cost me a dime until I convert the pitch into a completed, paid deal.

No one taught me how to do this.  I just did it.

Those speaker bios I had to write this morning?  One way or another, I made those speaking opportunities happen.  For BlogHer, I pitched an idea.  For Type-A Mom, I spoke last year and was requested by the attendees to speak again because I did a damn fine job.  Yeah, I said it.

Make your own opportunities.  Through relationships, direct requests, translating existing opportunities, whatever it takes.  Don’t wait for them to come to you.

I do well at conferences because I speak with the conference’s audience, not at them.  I speak with them as though we’re a small group in a small room.  For weeks prior, I try to figure out what they would want to discuss that can’t be Googled.  I ask what they’ll be muttering under their breath when they leave the session and I aim to eliminate anything resembling “waste of time.”

I confide in conference audiences.  I admit to them that I struggle with balance and deal with jealousy of other bloggers, then I follow that with how I harness that energy and spin it into inspiration and innovation.  I create mentors for myself every day.  Without permission, because who needs it? 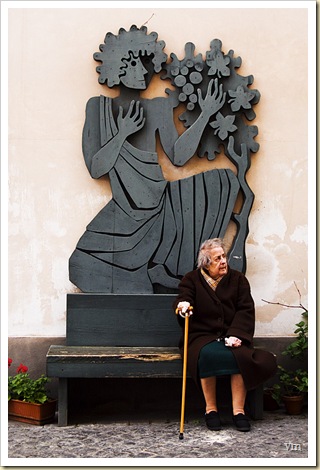 Don’t like where you are?  What you are doing?  How you are being treated?
Do something about it.

It’s overwhelming.   Worse, it can begin to seem as though circumstances are beyond your control.

“Bloggers don’t make money.”
“You have to be part of the right circles.”
“It’s just the way things are.”

I used to think there was a ceiling on what I could accomplish in social media.  Then I made a crack.  I am doing.  And by all accounts, I shouldn’t be able to be doing it.

Those two figures shouldn’t add up.  And they wouldn’t, if I played within the stifling rules that we’ve set for ourselves, where numbers and only numbers equal value.

No, Pepperidge Farm didn’t come to me and say “Wow, we noticed you post maybe once every two weeks and are generally a trouble-maker with an attitude.  We have a fully-formed project we’d like to throw at you.”  It took work.  It should take work.

I carry a big stick.  I’m swinging it in your direction.  In social media dog-years, I’m an old lady.  And this old lady has had enough of your crap, little missy.  Either duck and run or gather your sticks and fight.  I’ve had enough of your lip.

Exceedingly solid posts and comments that got me riled up
(I like these posts, so don’t read anything into “riled up” other than they spurred discussion.
I can’t actually remember the bad posts.  Brains are nice that way.):

I’m Not The Welcome Wagon, but I’ve Got Some Advice For You

Nothing in life is free. Except, it seems, a mommyblogger.

So if your Twitter account fell in the woods, would it make a sound? Or would anybody really care?

The Technology Doesn't Use You

Most useful to me:

UPDATED: If I get one more press-release about baby wipes I’m going to stab someone in the face

Picture Me in Spandex and Rollerskates as I Sing, "I Will Survive!"

(This post is going to be more bloggy and less writey, so here's notice to my mom who will tell me "Today's post wasn't one of my favorites."  To which I will reply, "Mom, they can't all be Victor Vito.  Besides, would you tell Steven Spielberg that "Saving Private Ryan was a'ight, but it was no The Color Purple."?  Then she would say, "You are no Steven Spielberg." and I would roll my eyes and steal one of her Diet Cokes.)

No kidding, hours after I posted my grand scheme and big fat empty promise to start a regular Sunday feature, I developed a fever.  A fever that lasted more than a week.

It spread to my two toddlers, then to my husband, then back to me just as I said aloud, "I think I'm all better now."

For Goose, my two year old son, and I, it turned into strep throat.  Holla!  Ack hack hack blargh.  Never mind, don't holla because your throat will split in two and fall out of your feet.

Soooooo I had to "invoke the Megan effect" and not even bother to turn on the computer for about a week.  The most I could muster was a blurred cursory view of my emails and a pathetic twitter or two, then I was out.

{start playing "I Will Survive" now for the full effect}

{Actually, I was thinking of the lyric "but now I'm back... from outer space" but it turned out to be "but now you're back..." which is actually more appropriate because I know some of you are sick of my disappearing and, well, yeah this song could totally be you singing.}

But now I'm back and scrambling again.  So far today, I've written a Nosh Notes for Blog Nosh Magazine, launched our new Green Living channel, introduced a new Submit form (did you know you can submit your own stuff to Blog Nosh?  you can!  and you should!), and am about to take some deep breaths as I address a handful of angry emails from eBay customers whose shipments are late.

Remind me to tell you some crazy eBay customers stories.  This holiday season brought out some real doozies and if I don't laugh about it, I'll cry.

Oh, and speaking of my parents (was I?) and posts that I keep saying I'm going to write, I do have photos of my studio, I have not forgotten about the second half of our wedding, and no, the guy I saw was not Morgan Freeman.  Obscure celebrities, people!  Obscure!  I could spot Morgan Freeman from behind with my eyes closed.  Pfft.  Amateurs.  ;)

*edited to add that I've now listened to the whole song above and I'm thinking that you wouldn't say any of those nice things about missing me and crying and feeling sorry for yourself.  Did I mention I'm on alot of antibiotics and they make my brain feel like it's full of drunken cotton?

**aaaaand I just reread this post and realize that I'm channeling my friend Jenny.  Which may or may not mean that drunk cotton = The Bloggess.  In any case, I'll take it because she's frickin' awesome and painfully hilarious (not to say that this post is either).  Therefore, from now on I'm going to start popping antibiotics when I have writer's block.

The "I'm Cheating for Wordless Wednesday and You Can't Stop Me!" Edition