BOSSY is the new Marlon Brando or And then BOSSY yelled "Stella!"

1:30 in New Orleans on a breezy Sunday afternoon in the South.  Time to meet BOSSY. 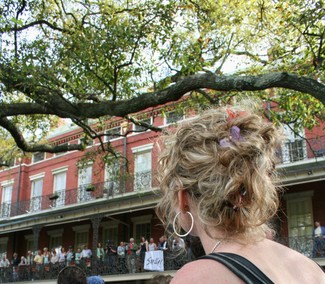 One of my favorite things about the teen book series Sweet Valley High was that the first chapter or so was basically a recap of anything significant about the series that had happened so far.  A reintroduction to the characters and their lives for anyone that might be picking up the series at, say, book 97 rather than book 1.

Although it was always tedious to read for someone that had read the 96 books prior, I always appreciated the effort.  So skim if you are already familiar with this intro:

For those of you that have just stumbled onto this blog or into the realm of reading blogs as a whole, BOSSY is the writer behind the blog iambossy.com, which is hilarious, satirically informative, and wholly entertaining.   I've been a fan of BOSSY since I first read her and always loved receiving her comments on my own blog.

So I did the whole BOSSY bumper sticker post as a bit of fun in response to her Dooce movie.  Not to gain her attention, as so many assumed, but to show her some appreciation.

Then Oh, the Joys! and I did another bumper sticker "tour" while she was down here for business, J being a friend of BOSSY, sealing my role as "BOSSY's Stalker."  As such, I couldn't miss her passing through New Orleans on her Excellent Road Trip.

Jump to Sunday in New Orleans.

Even better, jump to Sunday in New Orleans at Cafe Du Monde. As I insisted to both BOSSY and Erika, BOSSY's Baton Rouge host and author of dry ink, there is just something different in the air of New Orleans on a Sunday.  They scoffed, but I dared them to inhale on a Monday and disagree.

BOSSY was just as you would hope that she would be and nothing like I would be if I were on the sixth day of a road trip.  She was warm and natural.  She laughed and smiled a lot, which you would never guess based on the stoic photos she posts of herself on her own site.  She looks like an entirely different person when she smiles.

You would have felt at ease immediately upon meeting her.

After visiting over beignets, we made our way down Decatur toward JAX, then down Toulouse to Royal Street.  Around this time, I began our official "John Cusack Stalking Tour."  Yeah, I didn't lose my stalking virginity to BOSSY.  Fortunately for my storytelling penchant, BOSSY is an avid John Cusack fan, so I had a captive audience with whom I could share my sordid tales of John Cusack's filming of Runaway Jury in the French Quarter while I lived and worked there.

Did you know there was a rumor that Mr. Cusack demanded that the newly refurbished hardwood floors of his room at the Ritz be re-sanded for "karma" purposes during his stay?  Well, there was. 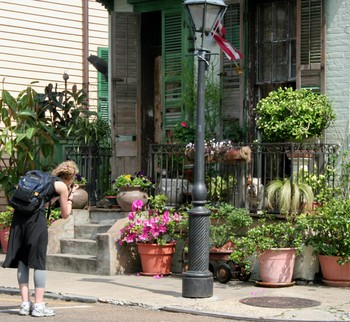 She considers them her friends.  Hence, this generous road trip.  "Generous" being my adjective, as "humble" is one with which you could easily saddle BOSSY.

She talked and took photographs, asked questions and listened, while we walked the streets of the French Quarter.  If you have the opportunity to meet her along the road, go out of your way to do so.  You will feel at ease.  You will feel welcome.  You will feel grateful.  I promise.

You will feel like you've known her for a long time.

And isn't that the point of all this?

After we rounded back up from Royal to Chartres, making a couple of "Haunted History Tour" stops via my memory's version along the way (anyone ever hear of the LaLaurie mansion ghost stories?  Well, Erika and BOSSY have now and I don't think they thank me for it.), we wound our way back to Jackson Square for a table full of appetizers in the shadow of St. Louis Cathedral.  On the other side of the square, entertainment was just gathering steam, though. 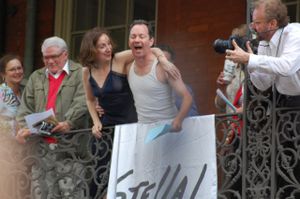 This particular weekend was the Tennessee Williams Literary Festival and we were about to bear witness to the highlight of the weekend, the Stella Shouting Contest, locally known as the "Stella Yell-Off"  or the "Stell-Off."  It's just what you'd think:  in honor of the scene from A Streetcar Named Desire in which Stanley bellows Stella's name outside her window, street-level contestants try to win the favor of a "Stella" (lovely negligee, yes) or "Stanley" (in all of his wife-beater glory) on the balcony above.

The fact that BOSSY's dog is named "Stella" only made it too cute.

We had no idea how much fun this was going to be to watch. 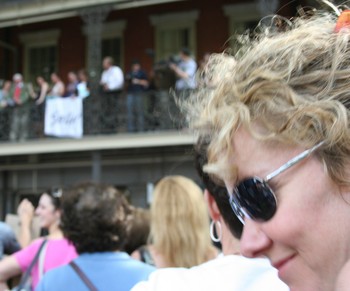 Given that, we wedged ourselves as close as late-comers could behind and slightly above the action, but pretty much missing the yellers, though getting great shots of Stella and Stanley on the balcony.   Special thanks to Erika for the great balcony shot you see above, by the way.  Her and her fancy lenses.

As a fun find for BOSSY and Erika, below is a youtube clip of the second part of the competition, including the appearance of a gold-painted street mime.  From our vantage point, we could only guess what was happening and we still laughed.  Look closely at the crowd behind the fence and you might see BOSSY.

BOSSY, I could not have asked for a better day to spend with you.  This road trip is a brilliant and generous idea. 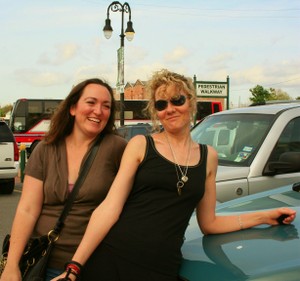 BOSSY's readers, you might have noticed that she hasn't been posting much about each stop?  If you are like me, you then begin a bit of a click-through journey through the blogs of the people she spent her stops with, discovering up to as many as five or more new blogs per stop.

She is knitting us together, one Saturn-sponsored stop at a time.

And I love her for it.

Thank you, BOSSY, and thank you BOSSY's readers, for clicking-through.  Nice to meet you, as well.

so others can find us, too. 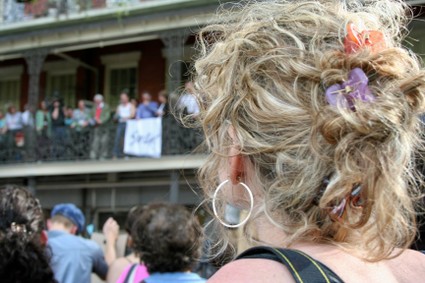 I promise I'm not dragging this out, but if I try to post everything right now,  you'll fall asleep, too, only from the dullards.  Tomorrow.  Seriously.

Update:  BOSSY is the new Marlon Brando or And then BOSSY Yelled "Stella!" (the one where I meet BOSSY)

Hey, all you BOSSY readers!
I see you wondering who BOSSY's stalker is.

That would be me.

Come back later tonight for lots of photos of the back of BOSSY'S neck.

A lot like this one that I would insert here if Typepad would get back online and let me insert any photos.

Like the one of BOSSY's shoulder that I would insert right here.

And, oh yeah, the one of BOSSY looking gorgeous in Cafe Du Monde.  You might have to email Typepad for that one.  They may have taken BOSSY seriously and now won't let me upload anything with the word "bossy" in the file.

In the meantime, here is your official
BOSSY Stalking Timeline a la Velveteen Mind:

Update:  BOSSY is the new Marlon Brando or And then BOSSY Yelled "Stella!" (the one where I meet BOSSY)