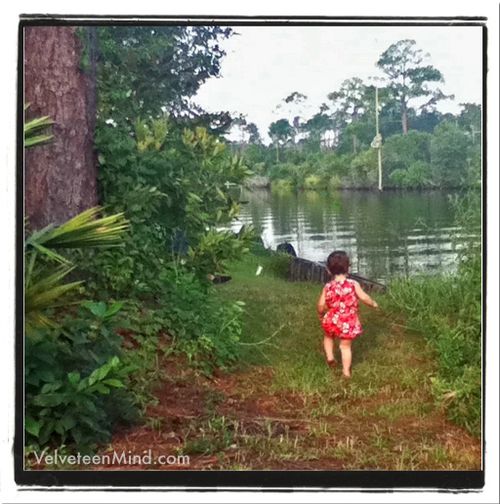 I never would have imagined.

I’m just going to blurt it out: We found out that Quinn is gifted.

There. I am officially a braggart parent, albeit a reluctant one.

But we have no intention of telling him. 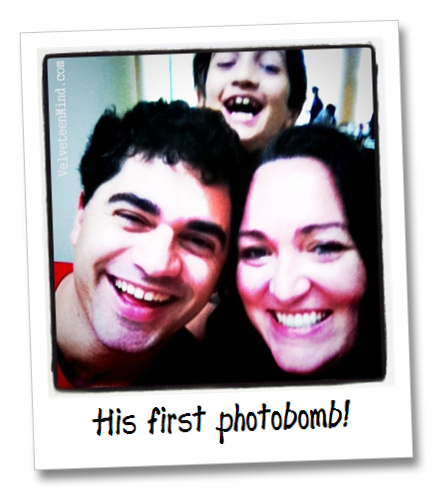 Quinn started testing for his elementary school’s gifted program last year during 1st grade. We rarely heard about the testing procedures unless he mentioned it offhand. “Oh yeah, I had testing with Ms. [Holds My Fate In Her Hands] today. Hm? Oh, it went fine.” (commence hunt for after-school snacks as thoroughly interested mother looks on)

Final testing happened this summer, though, and immediately jockeyed for prominence in my mind’s attention queue. It’s pretty heavy-handed to say that qualifying for the gifted program would really have much to do with the fate of our son’s successes, but still. What can I say? I wanted it for him.

When he came out of final testing, the clinician held out her hand for the self-addressed stamped envelope I completed while I waited. I had been watching those damn clinicians. They always came out all smiles and joking. Not ours. Quinn breezed passed her, nodded over his shoulder, and she gave me little more than a smile and a nod herself.

Walking through the parking lot, Quinn balanced between parking level banisters and my nonchalant questions.

Mom:  What kind of questions did they ask?

Quinn:  “What doesn’t go/ what comes next” stuff.

Quinn:  I did fine. I think I missed two.

Two months passed without hearing a word about results. Finally, a week before school, we received a form letter in that SASE that stated, “Your child, __Quinn__,   _does__  qualify.” Hot damn.

Qualifying for the gifted program doesn’t necessarily mean, well, it doesn’t guarantee… honestly, I have no idea what it means or doesn’t mean. All I knew was that we were proud of him, wanted to encourage him, but had no intention of telling him.

A week later, we were sure we would not tell him.

A few days after school started, my husband sat down with the gifted program leader to discuss what the program would entail, as well as to review Quinn’s test results. Well. His test results illustrated that Quinn tested in the top 1% in the nation. Top 1% of gifted children in the nation. 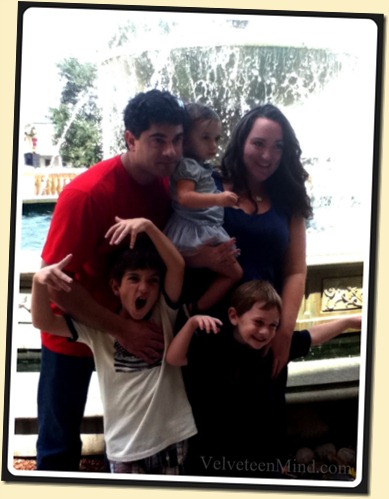 The program leader called in another representative to explain to my husband what this could mean for our son and why it is remarkable that, particularly as a boy, he tested so well. In short, his academic skills were unquestionably strong, but it was his social skills that were remarkable. Boys his age aren’t usually so adept at reading social cues, anticipating responses, and finding social ease.
(That’s Quinn in the white shirt, finding social ease.)

But if we don’t stay vigilant, he could grow impatient with school, with his friends, and “take his toys and go home.” It would be our job to be mindful and encourage him at home, in turn making his days at school more productive.

As you know, I have partnered with Hallmark through the end of the year on their Life Is A Special Occasion campaign. This month’s sponsored theme is “encouragement” and, honestly, if it weren’t for this writing challenge I don’t think I would even try to work this development out in words. We all know how foolish it is to merely bite our lips, squint our eyes, and then hope our questions work themselves out. But I need to talk about this. Work it out.

I can’t pretend that I know what I’m doing here. Absolutely, it is awesome. We are crazy proud of him. Crazy proud. I just know that my gut it telling me that we don’t tell our son anything about this “gifted” business. Rather, we learn ways to encourage him on the sly. An encouragement “photobomb,” if you will, when and where he least expects it.

In the video I shared with you in my previous post on encouragement, I prattled on about how we have made it a habit to praise our kids for their efforts rather than their innate abilities. The theory is that a day will come when they struggle with something that previously came easy to them and it’s at that point that we don’t want them to be paralyzed by self-doubt.

If we have always told them how smart they are, then they might view their stumbling blocks as results of not being smart enough. Instead, we focus on how hard they work. We encourage their effort. Our hope is that when they find themselves stumbling, they won’t throw up their hands and sigh, “I’m just not smart enough.” Our hope is that they will say to themselves, “I won’t give up. I just have to keep trying.”

If we can encourage perseverance in our family, then we will all be soundly gifted.

Hallmark is a sponsor of VelveteenMind.com through the end of 2011.
Sign up for their newsletter for discounts and tips on how you can celebrate everyday moments as a special occasion. Did I mention discounts?
Opinions are always my own, usually long-founded and stubborn.  ;)

by Po Bronson and Ashley Merryman. It apparently touches on very much the same themes of encouragement of effort vs. innate ability. Have any of you read it?

PPS-  In case you don't want to click on the dictionary link, a "photobomb" is when someone hops into a picture right as it's taken, usually making some crazy face in the background, to the utter ignorance of the subjects of the photo. They sort of rock.

In the Spotlight, Utterly Invisible 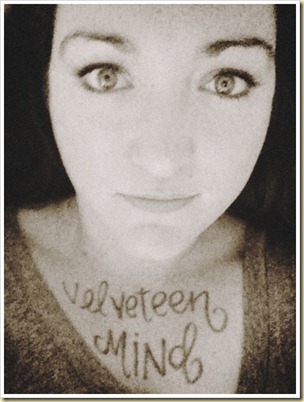 Late Saturday night, San Diego wind blowing through my open door, I took this photograph on my hotel room bed, shared it with my twitter followers, knowing exactly who I am and what a velveteen mind I have. Through doubt, I find my core. Reveling in the threadbare brings me there. 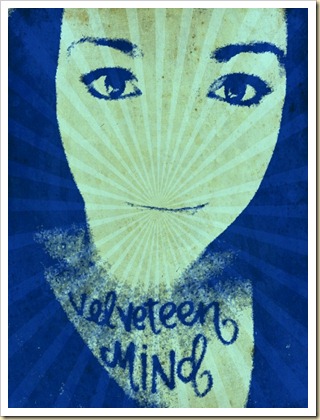 Thursday night, I co-hosted a party for more than a thousand women, at a conference hosting thousands. Hosting a party of this size, at a conference of such prominence, is a feat and an honor. Many people attempt to walk in our path and many choose to do it only once. You would think that hosting a prominent event might bring prominence itself, but that is not necessarily the case. If you do not utterly adore the reasons why you open the door to so many, you will abhor doing it again.

I adore the reasons we open the door to so many. This was the fifth year we have done so. Adore.

My reasons have very little to do with me. Good thing, too. I walked the tables of The People’s Party, determined to alter my course of mastering gregarious introversion, and welcomed unsuspecting guests to the party, thanked them for coming. Met with blank looks, absolute lack of any spark of recognition, I introduced myself as one of the co-hosts of the very party we were reveling in, complete with a wave of bravado and a nod toward the crowded room. I smiled. They nodded. They said, “Oh!” 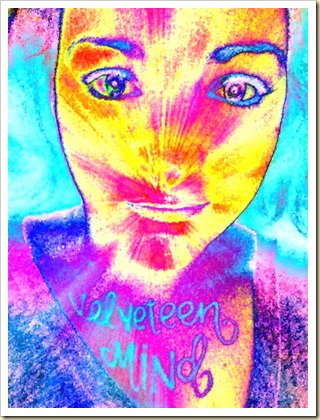 Friday was a manic day of sessions and meetings, brief encounters and shy approaches. Mastering gregarious introversion, that is me. I don’t expect you to recognize me but hold on to your tights if I recognize you.

Friday night, I committed to extroversion. I was all in. I soaked in words at Listen To Your Mother and gave off thriving, sweaty energy at Sparklecorn. Surrounded by my people, relieved of any responsibility for success or whimper, I let it go.

I walked in with ten drink tickets, I walked out with one. I did not share. I do not squeal when I meet people I admire, but I may have fawned when I met a few that night. I remember lots of flashbulbs. Let’s hope the party’s photographer edits gently. Let’s hope the recipients of my fawning remember kindly. I would take patiently. 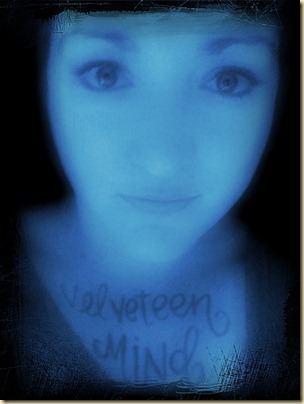 Saturday came in with a snicker. A solemn shake of the head. I answered, “Yes, yes, I know, but it had to be done.”

Whirlwind goodbyes to early escapees. Hints of the forlorn played on my lips.

Saturday night, we played it blue at Aiming Low. Completely inappropriate phrases smeared on our bodies in Sharpie. Completely iconic statements marked on our chests.
Go all in. It’s the only way to do it.

Everyone walked around with “You Are ________” stickers plastered across their chests, written by friends and admirers. Blank lines filled in with “remarkable” and “inspiring” and “hawt.” I openly admired the gestures, doled them out myself, not so subtly hoping someone would fortheloveofGod slap a notice on me.

Two nights before, I walked boldly through the spotlight of my peers, forced as they were to notice. Two nights later, I was utterly invisible to such notice, couldn’t even inspire a sticky note. Not one.

I know who I am. Even when you don’t. 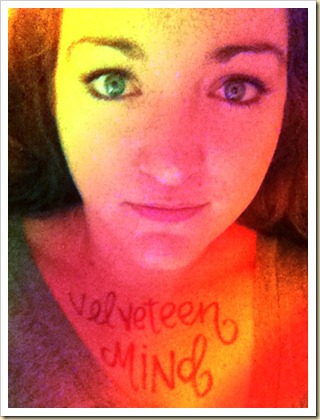 This is not about me. This is about reveling in the threadbare that is blogging. Yes, there are velveteen moments and we should relish them with our all. Yet it is the threadbare ones that draw us out. We all feel invisible sometimes, even if we have only moments ago stepped from the light.

We should all feel invisible sometimes. It helps us remember to see.

Go to the next conference. Live it with manic passion. Be confident. Regardless.
Relish the Velveteen. Revel in the Threadbare. 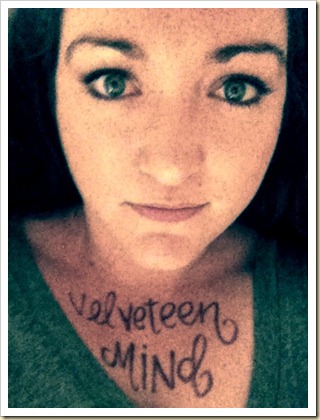 Photos edited by Alli Worthington, with absolutely no clue that I’d use them all.
A disgusting display of ego, but ya’ll don’t have your BlogHer photos up for me to steal, yet.
Sharpie tattoo by Robin Plemmons. Ask what she wrote on my arm.