Jarrod was one of my first college friends. I smile as I write that sentence. He is one of the few people that can make me laugh out loud with abandon. He doesn't even have to try. Early on, he cracked some kind of seal on my funny bone and now he tickles me with the slightest nudge.

He's also terribly gross and read that last sentence in a super gross way. Heather is his wife and I truly hope she is giving him the stink eye. 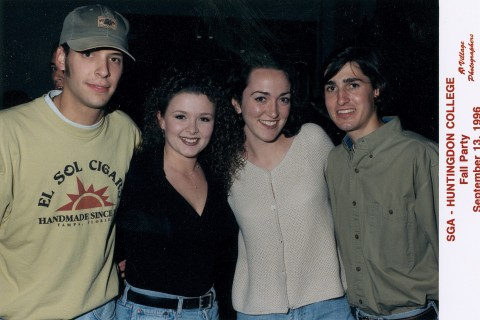 Heather started dating Jarrod almost immediately after we all started our freshman year together. Notice how I phrase that. I still shape it in my head as though she landed him before I could even find my footing, even these many years later. I was all doe-eyed over him and another boy the very day we all met, though I opted to target my silly girl powers on the other boy. The other boy was older and a more elusive "get." I figured I had loads of time to land Jarrod. 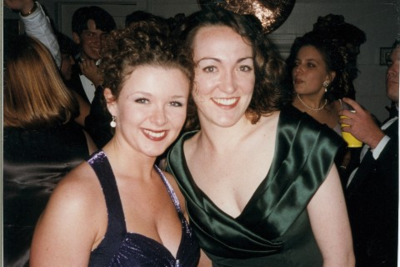 Heather is tiny and cute and a ballerina. I know. She also knows how to be gross, laughing at Jarrod's more vulgar jokes in a way I could never fathom. The day I knew I should give up my also-ran crush on Jarrod was the day I heard him and Heather rapping Snoop Dogg in the stairwell of our dorm. Perfectly in sync.

In other words, they were perfect for each other. And still are. Married the year we graduated.

Heather and I eventually became roommates in college, though our friendship became forever steadfast the moment we both became mothers. Our parenting styles synced much like D-O double-G, gin, and juice.

They are two of my best friends. Heather and Jarrod, not gin and juice, ya'll.

Nevertheless, I allowed nearly five years to pass without seeing them. Five years and now six children between us, though only a couple of states.

I am a wretched friend.

I've known for a few months now that the theme of "carving out time for friends" was coming up on our campaign calendar for Hallmark's Life Is A Special Occassion. My stomach dropped when I saw the suggested prompt because, put as simply as possible, I don't.

As each week ticked by on the calendar, I kept thinking about the importance of carving out time for friends. The suggestion was so casual, as though, of course!, everyone makes time for their friends. That's what normal, nice, human people do.

They live six hours from Gulfport in Atlanta. Two weekends ago, I drove to Atlanta for a conference. Every waking moment of my days were filled by the conference, there would be no sneaking off to see Heather and Jarrod. No way. Wasn't possible. Just too busy. Me and my fancy pants and my fancy pants conference. Sorry. Enjoy all of those new children of yours, I'm sure they are lovely.

Dropping everything to jet off to a conference, often across the country, has become part of my monthly routine. But I can't be bothered to do the same to see my friends.

I swear, I could feel their proximity tug at my heart like gravity. By the middle of the first day, despite finding myself truly awe-struck by the conference, I couldn't resist their pull another moment and threw myself into Atlanta rush hour traffic, barrelling toward toward them at a snail's pace. 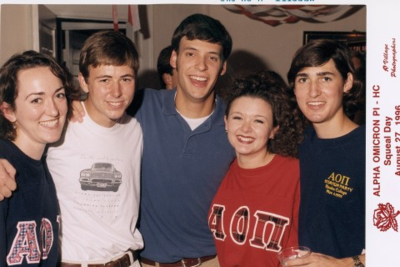 People, carve out time for your friends. That's what normal, nice, human people do. I'm beginning to suspect that is what, in fact, makes them normal, nice, and human.

We spent a beautiful evening together, details are as silly as you would imagine, and it was all I could do to drag myself back to my stupid hotel room. No time had passed between us, no love lost in the craggy bits of my bah humbug heart.

I wanted to cry as I pulled away from their house, warm and festooned for Fall. Everything that I loved about being young with them shone in the space between us as they waved goodbye. I miss them so very much.

We have to do a better job. We don't have to be those young, silly kids again, no, but the shared love between us can pull those silly kids to the surface every now and then. Let them marvel in the crisp Fall air at the stodgy grown-ups we've become.

Because with so much drama in the L-B-C, it's kinda hard bein' Snoop D-O double-G.

Heather and Jarrod sent all of the above college photos to me shortly after we lost all of our own photos in Hurricane Katrina, including every single shot from college. I can't begin to tell you what their thoughtfulness meant to me.

I can totally shake my head at all of those random boys, though. I quite liked being a silly girl.

This last one? That's Heather in our dorm room. In the chair, under the window, is Jarrod. On the couch is me and Al, just as we started dating. All of our lives, just over her shoulder. See you there. 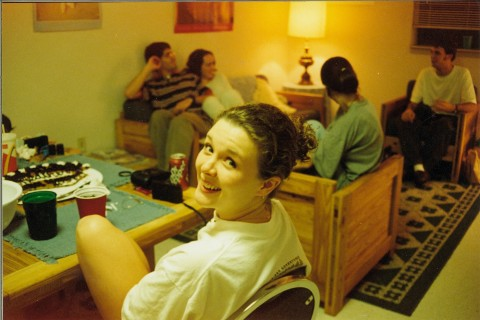 Hallmark is a sponsor of VelveteenMind.com through the end of 2011.
I don't know about you, but this whole Life Is a Special Occasion campaign is starting to stick for me.

Shake off your bah humbug and sign up for their newsletter. They'll know I sent you and I think that means one of the craggy bits in my heart will fill with a little more cheer.  Plus you'll get discounts and cheer of your own, just in time for the holidays. ;)

Hallmark is a sponsor of VelveteenMind.com through the end of 2011.
As part of their Life Is a Special Occasion campaign for October, they invited us to write about Fall and what it means to us.

Temperatures drop and my mind opens. I live all year for the Fall.

Summers in the South are oppressive, mind-blurring experiences. Everything I try to write is muddled by sweat and stickiness. I am anywhere but in the moment.

Cool breezes don’t begin rolling off of the Gulf of Mexico until well into October, but at the first demure nudge of cool, we know what to do. 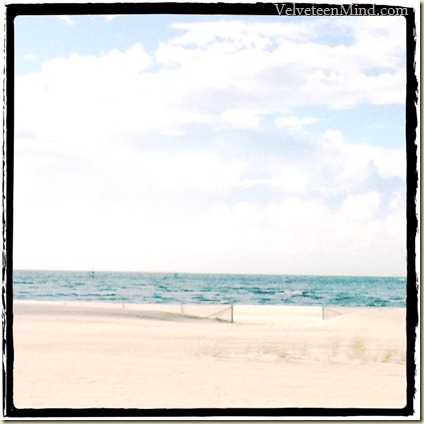 Nothing compares to walking barefoot on cold sand, white caps building on the Gulf behind children running along the shore, salt infusing everything. No one saying “stop.” October comes and we finally, finally, fall back in love with our beach.

Collect fragments from the water, make up stories about where these bits of treasure came from, and run until we collapse. The sand is so cool, so soft, a dream. Fall arrives and sweeps us away on flights of fancy.

Fall arrives and we pile into the car with friends and head into New Orleans. We were married in the French Quarter in November, ten years ago this year. November in New Orleans is unparalleled in beauty, except perhaps by the shroud of fantasy that envelopes the city in October.

We walk the streets, wrapped in cardigans and chunky sweaters, the boys sporting “cool” new hats, Iris tugging at the knit torture device on her head, the one we considered heart wrenchingly darling and were sure she would love. Everyone looks more stylish in layers.

Everyone with hot cocoa or coffee. Even if it is still in the low 70’s. It’s Fall enough for us.

It’s so much easier to say “yes” when it’s cool. Nothing is harsh. Everything is easier. You draw warmth from your friends, from your family, and everything is simply “yes.”

Our leaves don’t change color, no, but our mindset glows amber and gold. Cool beach breezes and windy city walks draw out the creativity in me, breathing to life the inspiration I’ve been searching for all summer.

If I ever write a book, I’ll write it in the Fall.

If I ever catch up on all of our family scrapbooking, I’ll design it in the Fall.

All of those beautiful cards in my drawer? They are sent in the Fall, written in flourishes of brown LePen, every inch of design adored, every unfulfilled promise to friends, adorned.

I have been waiting for this.

Thanks to Hallmark for pushing me to take a closer look at the small moments of our lives this year. Sign up for their newsletter for discounts and tips on how you can celebrate everyday moments as a special occasion.

And check out one of their new mini-commercials below, starring an old family friend (the girl).
That moment of softening hearts? That’s why I wanted to work with Hallmark.

Opinions are always my own, usually long-founded and stubborn.  ;)

Do visit Life Is A Special Occasion and scroll down to the bottom of the page to "Featured Bloggers" to read more stories from the campaign's writers.