An Artist Must Never Be a Prisoner

I have long been a prisoner of my own rules. Rules that I set for myself, thinking that they will help guide me but that surely bind me, instead.

I frequently turn to this space when I feel the pressure of those bindings begin to tighten. Or perhaps it's not the tightening that I'm feeling but rather the outside limits of my self-imposed constraints when I begin to stretch myself again. I push against my own rules until I'm finally ready to cut them loose. 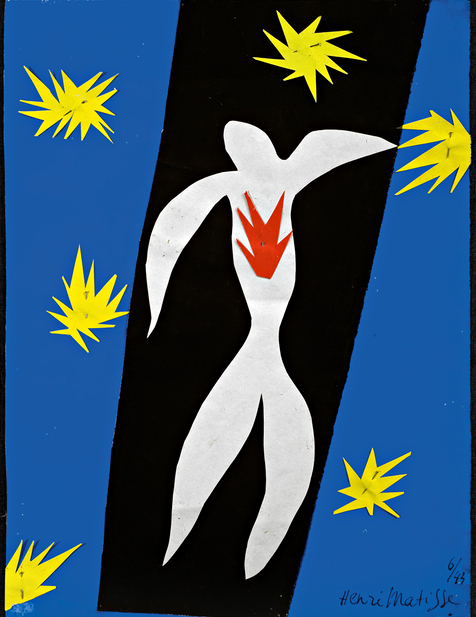 The work of French artist Henri Matisse (1869-1954) was recently featured on CBS Sunday Morning as it highlighted a new show at New York's Museum of Modern Art, "Henri Matisse: The Cut-Outs." CBS Sunday Morning has long held influence over my own work patterns in unusually significant ways. I was inspired to become a serious writer after watching their segment on Michael Chabon, which included a peek at his backyard writing studio. I found constant momentum for my literary site, Story Bleed Magazine, in Sunday Morning's eclectic features. Their Henri Matisse segment struck a chord with the "prisoner" quote above and my mind hasn't stopped resonating since.

After a prolonged period of personal loss and a significant decline in his health and mobility, Matisse found himself at a turning point in 1943 in south-east France. From the piece "Henri Matisse: drawing with scissors" in the Guardian,

"It was at this point that he cut a man out of white paper, a drooping pinheaded figure, all sagging limbs and blazing red heart, mounted on a black ground with bombs detonating around him. He called it The Fall of Icarus, after the ancient Greek who fell to his death because he had tried to fly too near the sun, but Matisse's Icarus marked a beginning, not an end. It turned out to be the first step in a process of radical reinvention that would see him abandon oil paints altogether in favour of new techniques based on cut and painted paper."

Radical reinvention. Matisse was in his 70's when he created some of his most influential pieces.

It's never too late to start again.

Can't see the video? Watch the Matisse story on CBSnews.com.

A prisoner of myself.

So many of my self-imposed rules are based on a path I've created in my mind. I readily admit that I spend far more time than I should looking behind me on that path, analyzing where I've been and what choices I've made, than looking forward.

This is not a post declaring "I'm going to write more." This is a bomb blast to stop giving myself so many rules and, if you see yourself in my destruction, for you to do the same. This is a cry for me to stop believing so many lies. This is a plea to break free.

A prisoner of success.

I need to break free of the prison of the mind that I have built for myself.

Whether you have been pursuing your dream for six months or six decades, I suspect some of this will resonate with you, too.

The Fall of Icarus.

The Matisse cut-out above is titled The Fall of Icarus.

There is symmetry and coincidental beauty there and it comes via Cirque du Soleil. 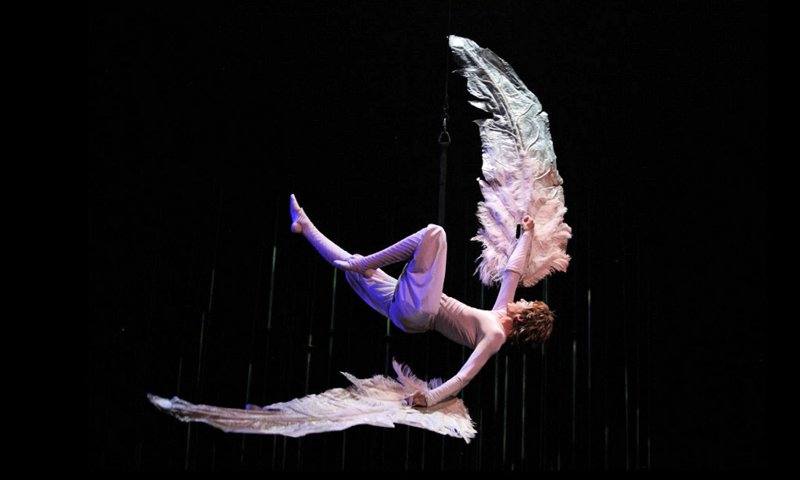 Long-time readers of Velveteen Mind know of my love of Cirque du Soleil and my pure fandom as I have traveled cross-country to catch their productions. I have never, however, thought to reach out to them and offer story coverage. As such, when they headed to New Orleans, we bought tickets and considered it done. It wasn't until Sunny, my partner at Wonder and Company, took part in a press event for Cirque du Soleil's Kurios in San Francisco that I realized I had something to offer.

If only I let them know I was here. To do so, I would need to loosen my bindings.

Sunny knows the value of being an online writer better than most and thinks nothing of reaching out and offering her talents. That's part of my point. While I wait for invitations or nods of approval, Sunny sees nothing but work to be done.

A prisoner of reputation.

This disparity comes from years of my, indeed, receiving invitations to share my talent. Years of receiving unsolicited nods of approval. I'll swallow my pride and acknowledge that on some level, I wished that Cirque du Soleil (or insert any other coveted thing or event) would come to me.

The traveling production was Cirque du Soleil's Varekai. The story of Icarus and his fall to earth.

A prisoner of style.

When I reached out to their team, I thought and rethought my approach half a dozen times. Should I list my accomplishments as a writer? Should I highlight what I could offer them in terms of potential ticket sales? Or... should I let them see the real me? The complete fan.

I went for full-on dork. I linked to my About page and then dove head-long into my passion for Cirque du Soleil and what exclusive access would mean to me. I raved and swooned and openly let them see me dream. I asked for what I never dared dream of: for them to do my makeup as a Cirque performer. 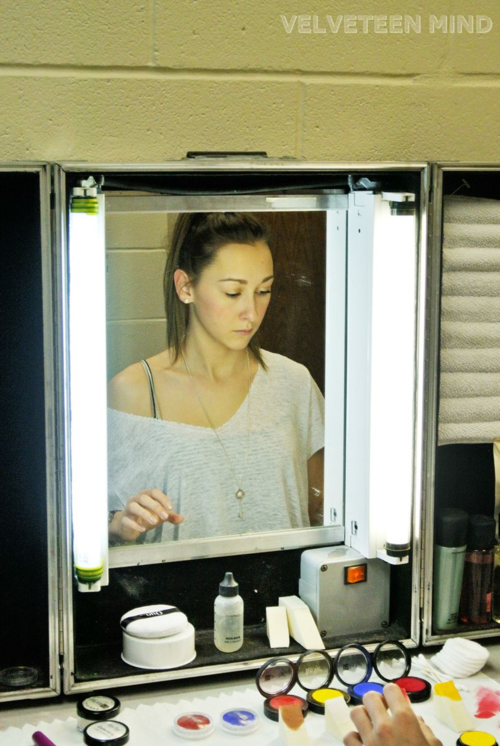 I promised to be professional once I got there but I let my heart's glow blow open the door.

Actually being professional (read: professionally detached and unbiased) was far more difficult than I anticipated. It's like going on a press junket and everyone around me blandly acknowleding that, yes, the Disney Vault is interesting and, sure, the thought that goes into the design of The Atlantis is thorough, when all I want to do is throw open my arms and cry, "THIS IS AMAZING!" with all the wide-eyed wonder that those experiences deserve.

Because who are we being cool for?

The team at Cirque du Soleil smiled kindly when my compliments turned to raves. They greeted me with "So we heard you are a fan" and then took me backstage.

I sat at a lighted mirror and tried not to tear up as Emily McCarthy, a young acrobat, applied her character makeup to my barely-able-to-conceal-the-joy face for over an hour. 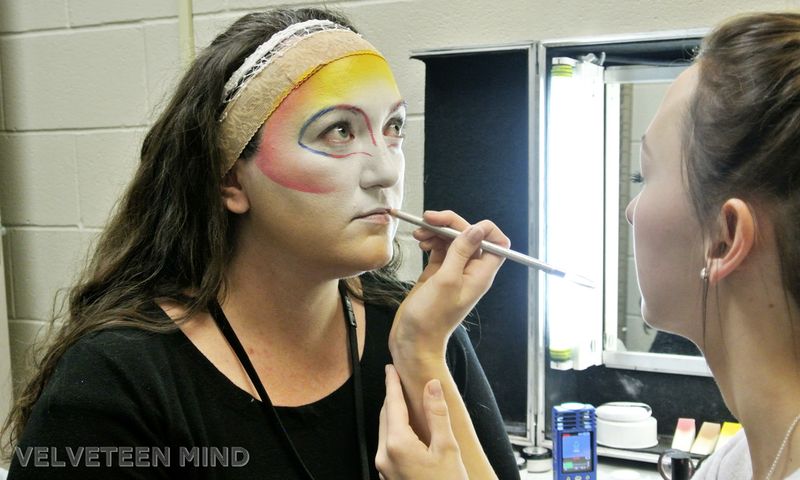 I exclaimed in glee when I saw myself as a Cirque du Soleil performer in the mirror and tried to memorize every moment of what it felt like before the makeup remover appeared, all too soon.

Everything, all too soon.

That, too, is my point. We're so busy rearranging the furniture of our self-imposed prisons of success and expectations and rules that we stop perceiving time as it is.

We have forever and no time at all.

Eight years later and I fear that I could have done so much more. I wish I had asked for fewer opinions and more stars from the sky. 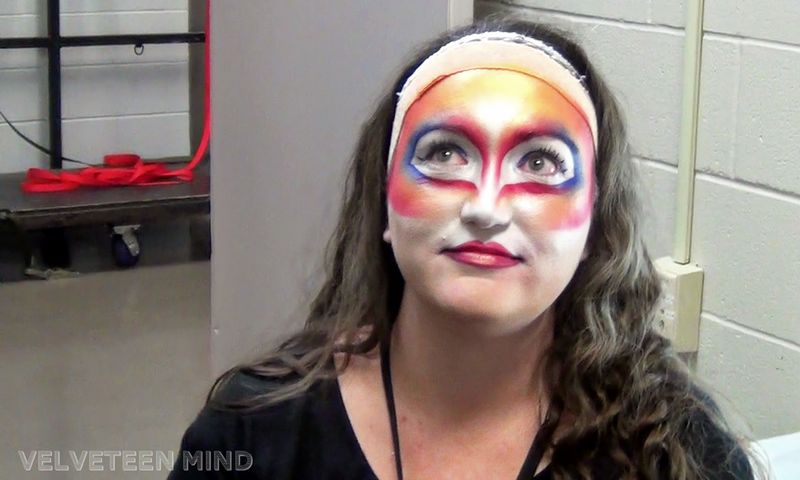 I wish I had soared closer to the sun.

Varekai finds Icarus after he has fallen and, instead of dashed in the ocean, imagines a world in which he has landed in a forest of magical creatures. Wonder follows.

My dreams are really and truly so big. My dreams are populated with magical creatures, green forests, and blue waters. It's time to soar closer to the sun.

Want to see the full makeup tutorial and story of my day with Cirque du Soleil? Check out Part 1 of my Varekai coverage at Wonder and Company and be sure to subscribe to our newsletter while you are there for the complete makeup experience (plus video) coming soon. Subscribe to Velveteen Mind's newsletter? You'll receive a heads up in the "elsewhere" columns when my next Cirque piece is up, too.

Varekai continues its tour opening January 14 in Wichita, KS. Now on sale in more than 26 cities, find Varekai at a city near you.