It's Lundi Gras today and we haven't done a single thing for Carnival this year.  It's Cheeks's first Mardi Gras and I had big plans for him, but then we were knocked on our butts by the sick germs!  The boys rarely ever get sick, so when they do, we are truly thrown off.  This has been going on for almost a week and I am only now beginning to see the light at the end of this runny-nose tunnel.

Fortunately, a little bit of Mardi Gras came to us today, along with some help to start digging our way out of this wretched mess. 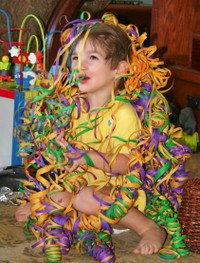 Al's mom called yesterday and said she wanted to come over, cold germs or no cold germs.  No problem.  With her, Santie brought the only little bit of Mardi Gras we actually have seen:  purple, green, & gold streamers!  Oh yes... 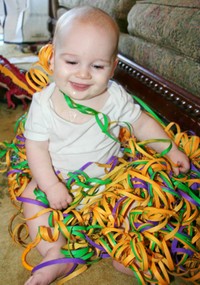 Tomorrow is Mardi Gras and our last chance to do anything more than sit in a pile of curly paper, as grateful as we were for even that.  Sick germs or not, I have got to pull us together and hit at least one parade.  Poor Cheeks is already sadly underrepresented in photos around here, he can't be behind in learning how to catch throws, as well. 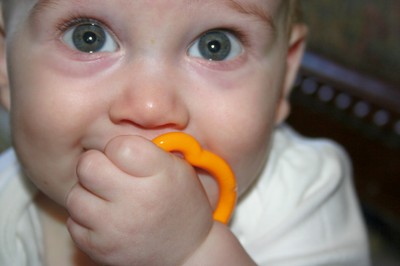 If this imploring lil' mug doesn't say "Throw me somethin' mister!" then I don't know what does.

Our Lady of the Slab

I am consumed with Looking for Mary: Or, The Blessed Mother and Me by Beverly Donofrio.  It is absolutely fascinating.  I promise this is not a religious blog, but you've caught me at a religiously-interested moment.

I converted to Catholicism when Al and I got married.  Women on my mother's side of the family were Catholic, so it was an easy decision.  Then again, my dad has a habit of referring to Mary as the "hoo ha" lady and to the rosary as "clickey beads."  Clickey beads is self-explanatory, but the "hoo ha" is for the Mary statues you see in people's yards, with her arms held low and open, palms up, as though she were rotating from side to side saying "hoo ha!  hoo ha!"  Picture Al Pacino in Scent of a Woman, though she's been the "hoo ha" lady for long before that.  I guess you could say I did have a few preconceived Catholic notions to overcome.

Nevertheless, Al's mom is very Catholic, particularly involved in the church and teaches at the Catholic school.  I think part of me was expecting to become that kind of Catholic (not devout, but certainly active), yet I failed to realize that I was marrying the son, not the mother.  Al is not exactly a practicing Catholic.  He can barely answer my Catholic questions and he went to Catholic school his whole life.  As a result, we haven't loaded the boys up every Sunday and hauled them off to mass.

In recent years, I inherited some beautiful Catholic icons from my female relatives.  I began to collect a few pieces on my own, as well.  Not until I became Catholic did I feel comfortable having statues in my own home, but my converting seemed to translate into permission to begin displaying my faith.  Like I wasn't a poser anymore.  One such piece I bought myself was a simple vintage porcelain bust of Mary, bought at a little store in the French Quarter.  I am only drawn to a very particular type of Mary, and this was one such face.  I adored her.

Or so we thought.

Al went to our slab one day shortly after the storm and came back with all that he could find that was ours.  It could fit in an Easter basket, so little was to be found.  But what was found was remarkable:

Continue reading "Our Lady of the Slab" »

Friday night we took the boys out on our regular Friday night date:  dinner at Los Tres Amigos and then hanging out time at Barnes & Noble.  We've been doing this for a couple of months now and I love it.  It's sort of an unofficial date right now and I think we should make it an official family date night so that we can look forward to it each week.  It's one of the only times during the week that Pants gets to see other kids, and even Cheeks got to play with another baby.  If things work out as planned with our mother's helper, though, I do plan on beginning to take Pants to the Lynn Meadow's Children's Museum each week for their Bear Cub Club playgroup.  We'll get to it.

When we get to Barnes & Noble, we definitely have a routine.  Pants and Al hit the magazines so that Al can get something to read while Pants plays at the Thomas the Tank Engine train table.  I take Cheeks and hit the Starbucks coffee line, then browse the new fiction tables.  I don't usually buy anything, but that night it was all I could do to not buy four books.  They had put out new displays on the tables and the selection was like a feast for the famished.  Everything I picked up looked good enough to devour on the spot.

Since Cheeks was still strapped into his car seat, he started fussing and I had to get us moving, so I began wandering.  I had picked up a paperback copy of Running With Scissors by Augusten Burroughs but decided to hunt for a hardback version instead.  I figure, if I'm going to rebuild my library, I might as well do it right.

I found the Biography section and the hardback I wanted, but then spotted the beautifully simple cover of Looking For Mary: Or, The Blessed Mother and Me by Beverly Donofrio.  I scanned the description and immediately put down the Burroughs memoir.  I can read that one anytime, but this Mary book seemed to demand my immediate attention.  Any summary with the phrase "a 'lapsed Catholic' inexplicably begins collecting Virgin Mary memorabilia at yard sales" is the book for me.  Right up my alley.

I began reading it that night and I can already feel the hunting instinct creeping up on me.  I know that's not going to be the point of the book, but I can't help seizing on the "memorabilia-hunting" aspect of it.  By the way, using the word memorabilia in reference to the Virgin Mary is just entertaining to me.  Like she was a tour that passed through.

The Blessed Mother and the Supreme Beings!

Get your tickets now or burn in hell for all eternity!
Subject to service charges and convenience fees.