I Drank the Bloody Kool-Aid

I am a reader.  Yes, you know that, but I don't just read books-- I voraciously adore books.

I love the weight of books in my hands, the texture of the paper, the quality of the production materials, the thoughtful cover design.  The way a hardback sounds when you lay it on a table with a decisive thump, the way a paperback gives to your impatience, the way the typeface sets the tone, the way the layout paces your reading.

A good book is a physical guide through the literary realm of the story.

So you can imagine my sense of defeat when I bought the audio version of Twilight.

When I decided to go to BlissDom in Nashville, it took very little consideration before I chose driving over flying.  Yes, flying would be fast and convenient and virtually the same price as driving...  but planes are far too fast.

I wanted a nice long drive.  Miles of road stretched out before me and my cute little wagon.  Hours to just think.

But something inside me said it wanted to spend hours thinking about vampires.  Yes, vampires.  I was just as surprised as you. 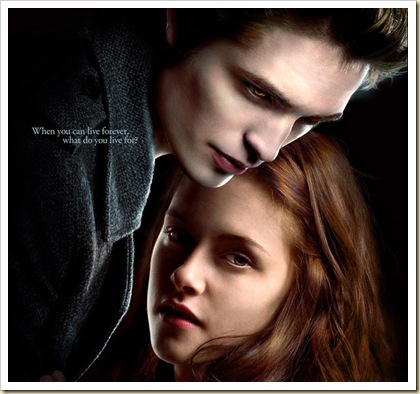 After sniffing out the growing interest around the book within my own Twitter community, I was ready to finally give in to my curiosity.

Perhaps it was the thought of a couple of days with a large group of women, hyper-analyzing minute details and stirring up frenzied discussions about virtual passions that put me in the mood to delve into the world of romantic fantasy during my drive.

The fact that it was teenage romantic fantasy would make it only all the more appropriate.  Squealing and the like, if you will.  However, I didn't realize it was about teenage vampires until I went to buy the audiobook.

I felt decidedly hip as I went to our local bookstore, thinking I was on the hunt for the au courant goth novel, probably only known to those in-the-know.  I give those I follow on Twitter much credit, as it happens.

I breezed up to the audio section at the front of the store and was almost pleasantly surprised that Twilight wasn't there.  Clearly, this was a book popular only with my ultra-hip Twitter community, not even to be found in the current audiobook selection. 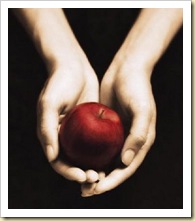 expected, I strode up to the help desk, pushed aside the piles of gift cards emblazoned  with a pair of pale hands holding a blood red apple (vaguely familiar...  is that the new logo for the holidays here this year?  sort of bizarre but argh! focus!) and asked the woman behind the counter if they had an audio copy of a book called "Twilight but I have no idea the name of the author."

She smiled patiently at me and then literally blushed.  In the next moment, she switched gears and plunged forward whole-heartedly, her kohl-smudged eyes widening a bit as she began (good Lord!) gushing...

"Oh my God I love those books!  It's Stephenie Meyer.  Stephenie Meyer, she's the author.  You haven't read them?  They are amazing.  I'm obsessed.  Obsessed.  You won't be able to look back.  Are they for you?  They are for you?  Oh I'm so jealous of you reading them for the first time.  Oh, Edward.  Just wait.  Edward!"

My jaw had dropped open slightly somewhere between her now-clearly-emo eyes spotting an opportunity to talk about the Twilight saga and the second "obsessed."  And, good grief, did she say "teen" audio?

No, I hadn't checked in teen audio.

Evidently, I was on the tail end of a trampled trend, not the black-dyed tips of it.

emerging smirk as my eyes fell on the cover... emblazoned with a pair of pale hands holding a blood red apple.

Right next to the words "Now a Major Motion Picture."

Did I say "trampled" trend?  I meant trampled into sticky spilled Coke and popcorn trend.

But wait, it gets better, because...

I was about to find myself holding my own conquered, blood-red heart in my hands at the feet of said Edward.

Because, yeah, he's one of those characters. 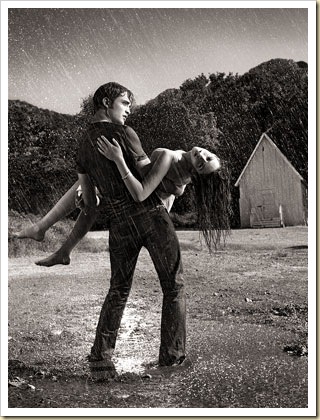 ... though, in the meantime, I won't laugh at you if you want to buy the audiobook

.  Or the supple Collector's Edition hardcover

.  Or the whole saga in a fancy box

New Here? Sign up for free delivery of new posts via email or feed reader.

Let's talk secrets.  Many of my readers have remarked how lucky I am to be able to blog about whatever I want, anonymously.  There is a freedom I have that many do not, I realize this.

When I started blogging in 2003, I had a personal blog that only friends and family had the address for.  That lasted oh, about 4 weeks.  I felt stifled, as what I mostly wanted to blog about was, shocking, my friends and family.  I wanted an outlet to think out loud, or in print as the case may be.

A few months later, I started blogging again.  I was going through infertility treatment and had found a community of women and men who knew exactly what I was going through.  Soon after reading them, I realized I could go from journaling in a book on to the web.

So I poured my heart out.  My blog was a daily journal of going through testing, treatment, loss.  My readers followed me through a roller coaster of trying drugs, going to the ER (from which I posted) DNA and genetic testing.  They supported me when I found out my husband was sterile and when I discovered he was physically unable to produce an erection.  When I had less than a week to get together money for a state grant cycle, they loaned and gave me money.  They rallied around me while I started the IVF process, and as I waited to find out whether or not it had been successful.

When I broke the news of my cancer on my blog - I was truly touched by those who sent notes, flowers, news articles.  I told them before I ever told my husband or my family and friends, because I knew I had to start telling sometime, and I felt telling might be easier if I practiced first in writing.

Hi, my name is Mary, and I'm a total fraud.  At my personal blog and other places  around the blogosphere, I've been known to preach about how important it is for moms to take care of themselves and to take time for themselves, even just a little each  day.  Um, so why am I sitting here in my sweats and slippers, without a trace of makeup, with  crazy hair that hasn't been maintained in three months?  Because I'm a fraud.  That's why.

See this picture?  It's the photo I use (most of the time) for my online presence.  It's a fairly decent representation of me, and I'm pleased with it.  But I'll let you in on a little secret.  I showered and put makeup on specifically for the momentous occasion of getting this photograph taken.

I knew, after becoming pregnant with baby number three and  leaving my full-time job as a college adviser, that I would be prone to the frumpy and dumpy days of a stay-at-home mom.  I even took steps to avoid it - I became a Mary Kay lady for God's sake!  That worked for a little while.